The site of the sunken cemetery represents most of the first center of settlement in the island of Camiguin. The place was used to be called "Tangub". Presently, it is already part of the municipality of Catarman. 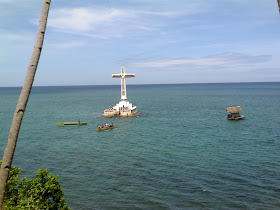 Most of the settlements sunk and became under sea water after the eruption of Mt. Vulcan(locally known as "Vulcan Daan"), living only the large cross of its cemetery visible above the water.

When I was still young I used to see the original cross of the sunken cemetery about a kilometer or two from the shore below the roads winding on Mt. Vulcan (locally known as tungatok). But frequent typhons damages the standing historic cross of the cemetery.

Just a few years ago, the Camiguingnons erected a new cross (the one in the picture) much nearer to the beach to honor the first center of civilization in the Island.